Bedouin tent in the past and today

The Bedouin used to be pastoralist nomads and so they had to be mobile and lived in tents. Today, at least in the Sinai, most Bedouins are settled, but there are still a handful of old people who refuse to go in a brick house and prefer to live in tents. After rains, however, when pasture is plentiful, many people move out with their herds to their grazing lands and the old tents are back in use again. But the most likely places where visitors can see a traditional Bedouin tent are tourist establishments, either along desert safaris or in the camps on the coast, where it is used as a communal gathering place for guests.

The tents are made by hand of goat and sheep hair, so they are fairly expensive, but provide an ideal shelter in the desert. Its loosely woven material lets air come in and the smoke out, so the tent is pleasant in summer; however, when it rains, the fibers get swollen and the tent becomes waterproof. Once visiting a friend in Wadi Saal heavy rain broke out and all the brick homes got flooded through the roof, but my friend’s old mom was dry and safe in her traditional tent!

The different Bedouin groups across the Middle East use very much the same type of tents, their culture, while there are some differences, is very similar. It is interesting to read old accounts of Bedouin life and spot what is still around today. One of the most detailed early accounts of Bedouin culture is by John Lewis Burckhardt who wrote several books. In his work published in 1831, “Notes on the Bedouins and Wahábys”, along other aspects of Bedouin life he describes the tent in great detail. Although he writes about Syria and the Arab Peninsula in this book, many of his observations are true in the Sinai too. “The tent is denominated beit or house, never kheime, which is the common (Arabic) term”, he states, and the expression for “pitching a tent” is building a house. The Bedouin of the Sinai also use these exact terms. Burckhardt goes into detailing the parts of the tent, from the poles to the layout and furniture, but the names of items are often different from how they are known in the Sinai. In fact, the names of these common items often vary from tribe to tribe even within the Sinai.

The layout of the tent, however, is always the same. “The tent is divided into two parts; the men’s apartment (mekaad rabiaa), and the women’s (meharrem);” Burckhardt explains. It is also true in the Sinai, even for houses built from concrete bricks today. You always find a guest room, the men’s sitting room, which in the Sinai dialect is also maqad. Regarding the women’s area, if someone knows a bit of Arabic, it’s not difficult to spot the common root in meharrem (or mahram) and the word for women – the word harem, something people in the West know as the place of the sultans’ wives, also comes from this word and concept.

Many of the items used in the tents and described by Burckhardt are used in today’s Bedouin home, such as the metal fireplace, manzap, or the dellet el kahwe to make a coffee in the fire. Other items, such as the simple stone mill (rhaa) or goat-skin water container (many different names depending on tribe and what it is used for), are sometimes seen in homes and gardens, but mostly for decoration. Read through Burckhardt’s wonderful book and realise how much of the traditional life you can still find in today’s contemporary Bedouin society!

Contents of the book 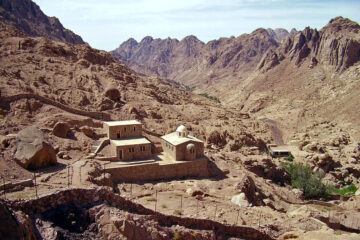 South Sinai was inhabited by hermits from the early days of monasticism, long before the establishment of the Monastery of St. Katherine. They built gardens, kept animals, built chapels and hermitages, and laid the foundation Read more…