Published by Discover Sinai on December 11, 2022

South Sinai was inhabited by hermits from the early days of monasticism, long before the establishment of the Monastery of St. Katherine. They built gardens, kept animals, built chapels and hermitages, and laid the foundation of what became a thriving monastic life. On Mt. Sinai and all around the high mountains there are hundreds of Byzantine sites.

The roots of monasticism go back all the way to the time of Christ, and the movement evolved in the deserts of Egypt from the 3rd century AD. Monasticism spread across the Middle East, and even reached Europe. Influenced by the early monks, several monastic traditions evolved.

The mystical and other-worldly nature of the Christian message very early laid the groundwork for the ascetical life. The example of the Old Testament Prophets, of John the Baptist and of Jesus himself, going into the wilderness to pray and fast set the example that was readily followed by the devout. [1]

The beginning of monasticism per-se comes right at the end of the Great Persecution of Diocletian, and the founder is Saint Anthony the Great (251 – 356). St. Anthony was among the Desert Fathers – those who left the world to seek God in the silence and seclusion of the Egyptian desert. These first monks were hermits, solitaries who battled temptation alone in the wilderness.

As time went on, monks began to congregate into closer communities. Saint Pachomius (ca. 292 – 348) is regarded as the founder of cenobitic monasticism, wherein all live the common life together in a single place under the direction of a single Abbot. The first such monastery was in Tabennisi, Egypt.

Saint Theodore of Egypt, the principle disciple of St. Pachomius, succeeded him as head of the monastic community at Tabennisi. He would later go on to found a third type of monastic institution, the skete, as a “middle road” between anchorites and cenobites. A skete is composed of individual monastic dwellings surrounding a common church. Each monk lives by himself, or with one or two others, coming together only on Sundays and feast days. The rest of the time they spend working and praying alone. [2]

One of the best known figures of the monastic period in Sinai is St. John the Ladder, also known as St. John Climacus, which means the same in Latin. The Bedouin know him as Galeli-maks, most probably a misinterpretation of the name. Not much is known about his exact life, but according to tradition:

he was born in Constantinople around the year 570. John went to Sinai when he was sixteen, submitting to Abba Martyrius as his instructor and guide. After four years, Saint John was tonsured as a monk.

For nineteen years Saint John progressed in monasticism in obedience to his spiritual Father. After the death of Abba Martyrius, Saint John embarked on a solitary life, settling in a wild place called Thola, where he spent forty years laboring in silence, fasting, prayer, and tears of penitence.

After forty years of solitary asceticism, he was chosen as igumen [3] of Sinai when he was seventy-five. Saint John governed the holy monastery for four years. Toward the end of his life, the Lord granted him the gifts of clairvoyance and wonderworking.

Knowing of the wisdom and spiritual gifts of Saint John of Sinai, the igumen of Raithu requested him to write down whatever was necessary for the salvation of those in the monastic life.

The saint called his work THE LADDER, for the book is “a fixed ladder leading from earthly things to the Holy of Holies….” The thirty steps of spiritual perfection correspond to the thirty years of the Lord’s age. When we have completed these thirty steps, we will find ourselves with the righteous and will not stumble. THE LADDER begins with renunciation of the world, and ends with God, Who is love (1 John 4:8). [4]

John’s book inspired a generation of ascetics who became known as the Sinaites, and it is still regarded as a very important religious work. The place mentioned as Thola today is called Wadi  Itlaah, and next to the cave where John stayed now a little chapel stands. The area containing the chapel and the cave is closed off, but the Monastery lets Orthodox pilgrims visit the place.

Despite the abundance of Byzantine ruins in the area, it is not easy to know which they are. These structures are made of dry stone walls, very similar to Bedouin buildings, and so it’s hard to tell them apart. You can’t really rely on Bedouin sources, as most of them would say that it was one of his ancestors who built a house or well you may ask about – but, possibly it is a Byzantine structure, maybe his father or grandfather just renovated it or built on it. There are some clues to spot the Byzantine buildings though.

Byzantine buildings are made of big, often very big, rocks that are not broken to smaller pieces. The door is very small, made of three big long rocks; one standing on each side and the third placed flat on them; they bear the weight of the wall. Furthermore often a short corridor-like entrance is constructed in front of the door, extending a bit out from the building’s wall. Some of the buildings are located in a garden, others stand in an open area in clusters or alone. Hermit cells are usually walled up cavities in or under big boulders, blending well in the environment. Some hermits spent years inside these tiny dark holes, being fed by others. The Bedouin also used similar structures, as a storeroom or temporary shelter, so again it’s not easy to tell them apart. The early settlers also developed complex water management systems; channels made of flat rocks were, most probably, originally built during the Byzantine era and cemented later.

The first Cristian settlers brought seeds and know-how with them, and developed techniques suitable for the environment. The orchard gardening was taken over by the Jebeliiya, and thus some of the Byzantine traditions – and through their offshoots the original seeds – live on.

3. Igumen is the title for the head of a monastery, similar to abbot. The term means “the one who is in charge,” or “the leader” in Greek. 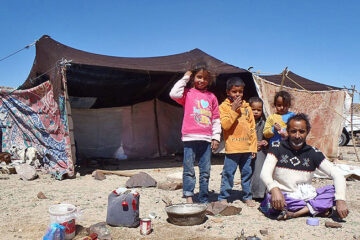 Bedouin tent in the past and today

The Bedouin used to be pastoralist nomads and so they had to be mobile and lived in tents. Today, at least in the Sinai, most Bedouins are settled, but there are still a handful of old Read more…