The 10 Best Mountains in the Sinai

How do you define the best mountain? The highest or the most famous? The toughest or the one with the best view? A mountain can be significant for various reasons, so it is difficult to choose the Top 10. The High Mountain Region – easy to guess – features many of the best mountains in the Sinai, but some of the highest peaks are actually found outside of this relatively small area contained within the circular dyke around St. Catherine. In fact, most of South Sinai is mountains, peak after peak. Called a jebel in Arabic, you could also argue what a mountain is… Is a big sandstone ridge a mountain? What about a plateau? Whatever the answer is, many of these geographical formations are very impressive. And any big hill or small mountain, or any elevated point in fact, provides a unique view. In this Top 10 only those mountains are listed that are relevant for visitors: some are right on the main tourist path, others are a bit off, but all these places, even if some rarely, are visited by trekkers and are known by good local Bedouin operators.

The highest mountain in Egypt, Mount Katherine is the peak of a range that starts at the town of St Catherine with Jebel Raba and Jebel Ahmar. While the later two are red granite mountains, Mt Katherine is of black volcanic rock. A little chapel marks the peak where the body of Saint Katherine was found according to legend, and a small stone hut built by the Monastery to provide a shelter for trekkers. It can get quite chilly here even on summer nights, and in winter freezing temperatures and even snow are common. The usual route to Mt Katherine is via Wadi Arbain and Wadi Shaq Musa, but there are other lesser used but great routes. On the other side of the range is Wadi Jibal, the unique world of the high mountain wadis, and a circuit to include it highly recommended instead of backtracking.

Mentioned in the holy books of all Abrahamic faiths, Mount Sinai – or Mount Horeb or Jebel Musa – is the most famous site in the Sinai interior. It is the location where Moses, prophet Musa to Muslims, is believed to have received the Ten Commandements and other Biblical events are said to have taken place. Most people visit Mt. Sinai from the Monastery of St Catherine starting at night, so they can catch the sunrise. Visiting the peak for sunset is another option and a more quiet experience, and the range, extending from the holy summit to Jebel Safsafa, harbours many little hidden treasures, such as Byzantine chapels, gardens and fantastic views and is ideal for a full day trek.

Rarely visited, many people, including myself, believe this is the best mountain in Sinai. In fact, it was believed to be the real Mt Sinai and you find many monastic ruins in the area, as well as inscriptions carved in the rock from even earlier ages. Several mountains in the Sinai are higher than Jebel Serbal, but since it is surrounded by lower ranges and wadis, it feels to be the highest. Climbing up in the very steep gully known as Naqb Shaharani is a tough challenge that can take up to a day, but there is a little garden at the top with water and an almond tree, known as Farsh Loz, that provides for a well deserved rest. From the peak you can see the low ranges, wadis and plains, the distant high mountains, the Gulf of Suez and mainland Egypt. You also find several basins atop, and more abandoned gardens. The trek takes a minimum of two days, but possibly three. Ask about the situation in Wadi Feiran where you can possibly arrange a guide in one of the roadside Bedouin gardens.

Featuring the second highest peak in Egypt, it is another great mountain with fantastic views on the Gulf of Suez and Egypt on the other side. It is in a remote area that is most conveniently approached from the town of St Catherine, but it takes two days if you want to reach it on foot. Different routes exist, some including Mt Katherine. You could take a 4×4, and it is often done this way, to the base of the range, and then you could even make it to the top and back the same day. But if you came this far a night out is a great idea, and you could actually continue the trek via different routes.

An eroded sandstone mountain that is very easy to recognise, the flat-topped Jebel Mileihis is located between St Katherine, Nuweiba and Dahab near the main asphalt road. Hikes, camel and 4×4 safaris often begin at the road-side stop of Ras Ghazala, and it is a convenient starting point to visit the mountain too. Jebel Mileihis looks impressive, but the climb to the top is quite easy and safe, and you can get stunning views from the top on the desert and even a sliver of the sea near Nuweiba. If you only want to climb the mountain a full day is enough, but you find many other attractions in the area so a multiple-day hike is recommended.

Often seen together with Jebel Mileihis as they stand above lower ranges in the desert, Jebel Berqa is more difficult to reach and climb. With a 4×4 vehicle its base can be reached from Wadi Zalaqa, while several other routes exist for camels and trekkers, although they’re all quite long. You find many canyons at the base of the mountain, and the climb to the peak starts in one of them. To the top of the canyon the hike is fairly easy, but it gets more difficult from here and the last 10 metres to the very top is potentially dangerous. A rope comes handy for this last stretch, which your guide should fix to a metal pin found at the top. You should only attempt the climb if you’re experienced enough and make sure your guide is present all along with you, and call it off if you’re not confident. Either you managed to reach the summit or not, the base is a magical place for a night in the desert and the moon-lit mountain is a stunning sight.

Located near the main St Catherine-coast road, Jebel Matamir is a surrealistic sandstone range consisting of several elongated hills, high sand dunes and secluded basins. The usual trek starts at the roadside Bedouin settlement near the archaeological Nawamis site, and includes other wonderful places in the desert such as Jebel Makharum (Jebel Barqa) and the Haduda sand dune. It is a multiple day trek, but if you only want to visit Jebel Matamir, one day is enough. The most striking feature of the range is the maze of sandy basins located high up and enclosed by several peaks. You get great vistas from the top, but the narrow gullies and high sand dunes are also very spectacular.

Situated at the northern perimeter of the High Mountain Region, this impressive granite dome can be reached from the town of St Catherine or the little settlement of Sheikh Awad. The later is famous for the very unique Al-Karm Ecolodge, and you could start from or finish here, or make a loop via Nab el Hawa. Either way you go, you cannot cover the whole route in one day and the night is spent below the peak Jebel of Banat. It is not a very high mountain, but since it stands on the edge of the high mountain massif, it features a very dramatic drop with big open plains right below you. Below the peak of Jebel Banat you find a series of water pools and a seasonal waterfall known as Sid al Nogra. The smooth granite mountain is also popular with rock climbers.

Jebel el Bab stands at the western perimeter of the High Mountain Ranges, but on this side the drop is gradual, with long mountain ranges and wadis running towards the coast. In clear weather the Gulf of Suez is visible a bit, and across it the mountains in mainland Egypt. Jebel el Bab, also called Bab el Donya, is part of a longer range standing above Wadi Jibal and Farsh Rumana. The usual route starts in the town of St Catherine, and it takes 2 days if you don’t add other nearby attractions. Night is usually spent in a Bedouin garden in Farsh Rumana, but you could also sleep on the top in good weather. Below the peak water trickles from a spring, known as Ein Najila, running through several cascades before disappearing in the sandy wadi floor.

The area is along the main safari routes as you find the Forest of Pillars at the base of Jebel Raqaba, but the mountain itself is rarely climbed. If you have time, however, and are up for a tougher climb, it is very worth to do so. Jebel Raqaba is part of the Tih Plateau, a massive water-catchment area taking up much of the center of the peninsula and draining to the north. Its slope is gentle northwards, but the plateau comes to a dramatic drop in the south: looking at it from the sandy desert belt below, it is like a big wall. Jebel Raqaba is one of several “heads” of the Tih jetting into the desert, and the views from its top, on the sandy plains, the distant high mountains and the plateau’s wall running to two directions, are amazing. The area is usually reached by a 4×4 vehicle as part of a safari that also includes Serabit el Khadim, but long camel safaris are also organised sometimes. You could find operators in Ras Sudr and Abu Zenima coming from Cairo, or the major tourist locations in the south. 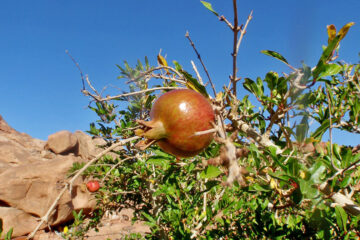 The Fruits of the Sinai Mountains

From spring to late autumn, there is always some seasonal fruit in the Sinai mountains. Wetter and cooler than the rest of the desert, the wadis of the mountainous region around St Catherine hide over 500 ancient orchards. Read more…