The Fruits of the Sinai Mountains

From spring to late autumn, there is always some seasonal fruit in the Sinai mountains. Wetter and cooler than the rest of the desert, the wadis of the mountainous region around St Catherine hide over 500 ancient orchards. Many are abandoned today, but you can still find a lot of beautiful gardens that are cared for. The Bedouin of the mountains are expert gardeners who have been cultivating a wide range of fruit species for over a thousand years. They had to deal with the shortage of water, on one hand, as well as with the forceful flash floods that occasionally sweep through the valleys, on the other. So garden walls were built robust, to withstand the onslaught of water and to retain the soil. At the same time holes in the wall and channels were built to direct some of the water to wells and small reservoirs. Built from rocks of various sizes, some as big as a car, every ancient garden is a work of art. The gardeners are also masters of grafting, putting branches of better yielding fruit varieties on local, more drought resistant trees. In some instances up to three different fruit species were grafted on a single tree.

Almond trees are the first to flower, starting as early as January, but it is apricot that bears fruit first around the beginning of June. When a fruit is available depends on the elevation and also on the variety. In the village apple might be ready, but not yet further up in the mountains. Also some apple varieties, to stick with the example, ripen earlier, while others later. The last fruits are pomegranate and quince, as late as October or even November.

Fruit grown in the mountains: 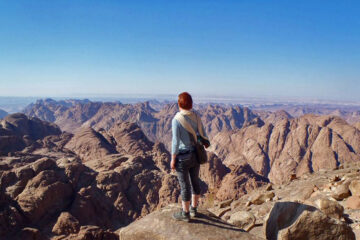 The 10 Best Mountains in the Sinai

How do you define the best mountain? The highest or the most famous? The toughest or the one with the best view? A mountain can be significant for various reasons, so it is difficult to Read more…